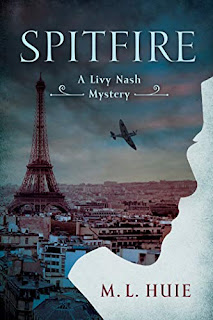 M. L. Huie writes a tense, gritty, knuckle- biting adventure with moments of WWII that will stay in your memory. The men and women that trained for the SOE and were parachuted into Paris while occupied...so very many of them died. It is a fascinating period of History with Women as well as Men bearing deep scars because of things they have seen. They were trained to kill in hand- to- hand combat and worked with the French Resistance.

Olivia drinks too much and works for the Paper writing a Woman's Column. She has been through what only hardened combat soldiers go through during the War and her job bores her. Mr. Fleming approaches her about joining Intelligence and from that point on this book takes off and doesn't let go. There are twists and turns and heart-break and sheer determination and you feel every emotion with her. Her flaws do not make her less likeable and the Characters twist and turns with double- cross as a main feature and trust very limited.

If you like WWII thrillers then this is the book for you. I do.This book is highly recommended. It has a proper bite and doesn't stop surprising you until the last page. Five Stars...

How far would you go for vengeance?

It's V-E Day 1946 in London. World War II is long over, and former spy Livy Nash is celebrating with her third drink before noon. She went to war to kill Nazis. Dropped behind enemy lines as a courier, she quickly became one of the toughest agents in France. But her war ended with betrayal and the execution of the man she loved. Now, Livy spends her days proofreading a demeaning advice column for little ladies at home, and her nights alone with black market vodka.

But everything changes when she meets the infamous Ian Fleming. The man who will create the world's most sophisticated secret agent has an agenda of his own and sends Livy back to France with one task: track down the traitor who killed the only man she ever loved. Livy jumps at the chance, heading back to Paris undercover as a journalist. But the City of Lights is teeming with spies, and Livy quickly learns just how much the game has changed. With enemies on every corner and ever-shifting alliances, she'll have to learn to fight a new war if she wants to conquer the past once and for all.

Posted by Historical Reminiscing with Marilyn at 1:09 PM